Although plastics have been used on a larger scale for more than 100 years, they are, in contrast to metals, glass or paper, only very hesitantly perceived as valuable materials that are worth recycling. Too often, plastic products end up after use in a landfill or in an incineration plant. Only the realization that plastics are of such high quality and durable that they do not disappear on their own when they end up in the environment has led to a rethink. This is also the case in Indonesia, where the Pan Era-Group has specialized in the recycling of polyethylene and the manufacture of carrier bags and packaging bags from it. Pan Era Group relies on high technical standards and, after extensive preliminary tests, decided on a recycling line from the Austrian MAS extrusion technology company.

Indonesian family company Pan Era Group with its headquarters in North Jakarta is a group of companies active in multiple business sectors, one of them is the recycling of post-consumer plastic waste and processing it into film products. The founding of the company dates back to 1989 when its founder started grinding and washing several types of plastic waste, becoming one of the early players in this field.

The company then progressed to producing recycled pellets and subsequently, in 1997 it then started producing plastic shopping bags and packaging film made from recycled material. Ever since, the company has stayed true to its roots and has always used recycled material. To date, more than 95% of the plastic bags produced and sold by Pan Era Group are made using at least 80% recycled content. And it has achieved a market leader position, and is one of the most sought-after products on the market. This indicates that the group possesses excellent knowledge of the recycling process as well as firm dedication to quality.

Following years of continued growth, the company then expanded to Cikarang in the province of West Java, in 2011. Production quickly ramped up and within several years, the group has already used up almost all of its capacity. Currently this facility is one of the most prestigious recycling plants in the region, drawing praise from many of its visitors, as Pan-Era Director Wilson Pandhika confirms (Fig.1)

The group is now progressing on one of its most ambitious growth steps so far, which is the establishment of yet another plastic recycling plant in Cikande, about one and a half hours drive from the Indonesian capital of Jakarta. The new facility is projected to be one of the largest Polyethylene recycling plants in South-East Asia. (Fig.2 to 4). It is at this new location that Pan Era Group relies on Austrian recycling competence and has ordered an ES-compound extrusion line with an output of 1000 kg PE per hour from MAS.

The group is now progressing on one of its most ambitious growth steps so far, which is the establishment of yet another plastic recycling plant in Cikande. The new facility is projected to be one of the largest Polyethylene recycling plants in South East Asia. At this new location, Pan Era Group will be relying on Austrian recycling technology and has ordered an ES-compound extrusion line with an output of 1000 kg PE per hour from MAS.

The “plus” of the MAS-extrusion-technology: Gentle polymer plasticization

MAS stands for innovative extrusion technology, especially the conical twin-screw-extruders with co-rotating screws. They are available in six sizes, from the MAS 24 laboratory extruder with an hourly output of 10 kg PE up to the high-performance extruder with an output of more than 2,000 kg / h. The range is supplemented by the CDF-melt-filters with very efficient, rotating disc filters and the DRD-centrifugal-cleaners for the pretreatment of input materials, especially for drying and the waterless separation of solids.

Based on the co-rotating screws, the conical MAS-extruders offer a specific property profile that makes them ideal for complex recycling and compounding tasks. Outstanding is the very uniform plasticization at a comparatively low to medium pressure and shear level, documented by measurements of the physical product characteristics. Their analysis show that the qualities of the input material stay at maximum after processing which is of decisive importance for both recycling applications and compounding tasks. Thanks to their modular structure, the screws can be easily and quickly fine-tuned to a specific task by exchanging individual screw-segments.

Another advantage is the system-specific large feed opening on the extruder, which favors the feeding in of material with a low bulk density, such as recycling flakes or fibrous and powdery additives in compounding technology.

High up on the Pan Era Group’s project specification was the ability to produce in an one-stage-process a particle-free HDPE in different colors, suitable for producing new high quality packaging films or various bottles for detergents or other household chemicals.

The area sales manager of MAS, Juergen Morosz comments: “The challenge was to correctly assess the input material in terms of its composition and degree of soiling and the system design required for processing. In close cooperation with the customer, after a series of representative material tests, we have found a process technology solution that optimally uses the potential of the MAS extruder. The ideal solution was, respectively is, a system concept derived from our ES compounder extruder cascade. It consists of a single-screw extruder for melting and plasticizing the washed and dried PE flakes and a subsequent CDF 500-D twin disc filter unit from our supply program, where particles with a fineness of 130 μm are retained and segregated. The thus cleaned material stream is then fed to the conical MAS twin-screw extruder by side-feeding in the area of the feed zone. But that was not enough cleaning. There were still printing ink residues and odor emissions in the melt. In order to remove these contaminations we have added a vacuum unit to the specifically large intake opening of the twin-screw-extruder and converted it into a degassing zone, where the volatile melt components can be sucked off efficiently. From there the polymer melt is conveyed further, compressed gently and homogenized until it finally reaches a second degassing zone for second cleansing (Fig. 5). Passing an MFI-measuring station, it finally reaches the granulating unit.”

As an additional bonus, the system concept also offers the compounding ability which actually is used to achieve high degree of homogenization of the recycled resin. As it is the core property of the ES-compounder systems, there is the intention to use it for extending the scope of materials to compounded materials for technical applications. To do this, the feed zone of the MAS twin screw extruder only needs to be combined with a vacuum lock through which powdered additives such as talc or calcium carbonate can be added without the need for additional side feeder units. This means that Pan Era Group has every opportunity to expand the r-HDPE range to include material variants for technical applications. 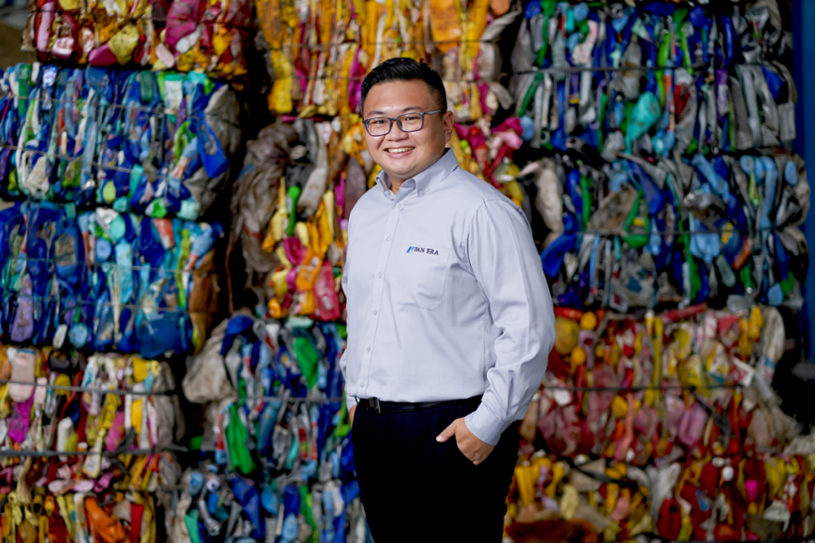 Photo: Pan Era
Fig.1: Wilson Pandhika is heading the Pan Era Processing Division, which is among the leading recycling companies in South-East Asia. 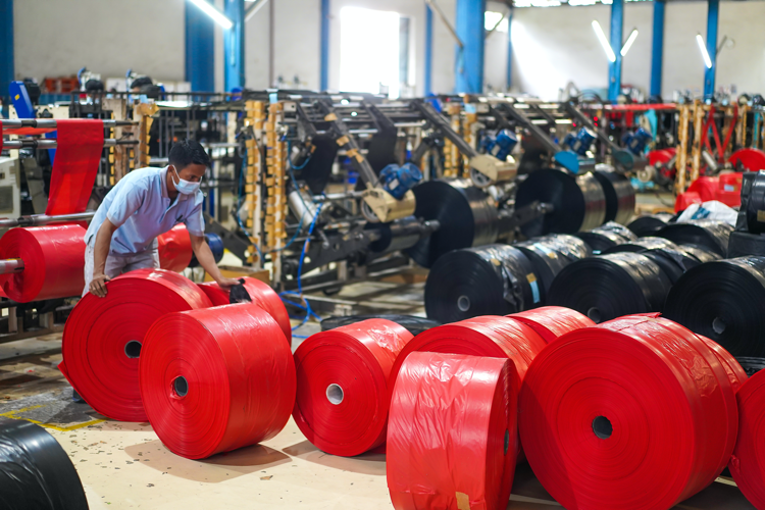 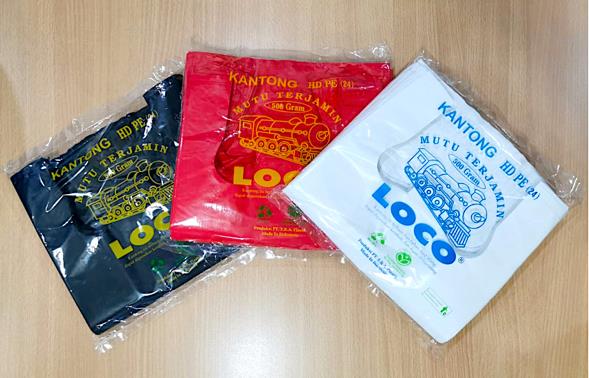 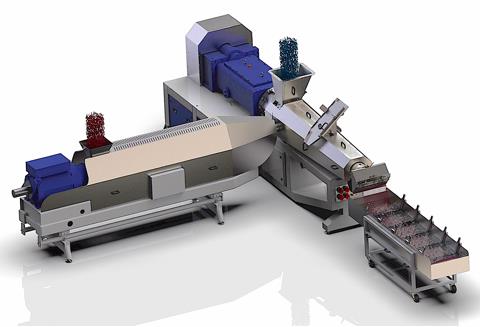 Photo: MAS
Fig. 5: The core component of the MAS recycling plant for PE post-consumer waste consists of a 1-screw extruder (left) for melting the pre-cleaned PE flakes and a MAS twin-screw extruder for efficient degassing and subsequent up-cycling by compounding with additives.

Whatever you intend to recycle or turn into alternative fuel, eFACTOR3 can provide a custom solution. For more information, contact Hartmut Bendfeldt at 1.877.801.3232, hbendfeldt@efactor3.com, and visit www.efactor3.com.

Do you wish to receive our monthly newsletters, with the latest industry news?

This website uses cookies to improve your experience while you navigate through the website. Out of these, the cookies that are categorized as necessary are stored on your browser as they are essential for the working of basic functionalities of the website. We also use third-party cookies that help us analyze and understand how you use this website. These cookies will be stored in your browser only with your consent. You also have the option to opt-out of these cookies. But opting out of some of these cookies may affect your browsing experience.
Necessary Always Enabled
Necessary cookies are absolutely essential for the website to function properly. This category only includes cookies that ensures basic functionalities and security features of the website. These cookies do not store any personal information.
Non-necessary
Any cookies that may not be particularly necessary for the website to function and is used specifically to collect user personal data via analytics, ads, other embedded contents are termed as non-necessary cookies. It is mandatory to procure user consent prior to running these cookies on your website.
SAVE & ACCEPT